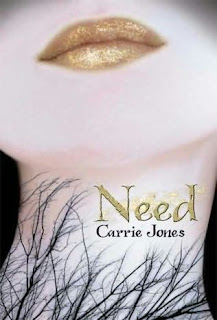 Author: Carrie Jones
Pages:
Publisher:
Format: Paperback
My Rating: 3.5 out of 5 stars
Summary (from the author's website): Zara collects phobias the way other high school girls collect lipsticks. Little wonder, since life's been pretty rough so far. Her father left, her stepfather just died, and her mother's pretty much checked out. Now Zara's living with her grandmother in sleepy, cold Maine so that she stays 'safe.' Zara doesn't think she's in danger; she thinks her mother can't deal. Wrong. Turns out that guy she sees everywhere, the one leaving trails of gold glitter, isn't a figment of her imagination. He's a pixie - and not the cute, lovable kind with wings. He's the kind who has dreadful, uncontrollable needs. And he's trailing Zara...

I bought this book after months of telling myself that I would, and I have to say, I'm sorry I didn't do it sooner! Zara is a great character, and you can feel yourself bonding with her almost immediately after opening the book. She's sarcastic, driven, and a little lonely - someone every teen can relate to, I think.
Anyways, on with the summary, yes?
The book begins in the airplane Zara is taking to Maine, where she'll be living with her step-father's mother Betty. Zara begins to tell the reader a bit about herself, the death of her stepfather, and her resulting depression - the reason Zara's mother is sending her away.
Zara settles in with her grandmother and adjusts to life in Maine, attending school the day after she arrives. She befriends Devyn and Issie, some of the nicest people at the school, and is relatively content until she attracts some unwanted attention from Megan - the resident mean girl - after beating her in a race during gym class. She also catches the eyes of both Ian and Nick - one a friendly overachiever, and the other a mysterious guy with a great car.
A few weeks into her stay, Zara begins to feel like she's being watched. She sees a mysterious figure near the side of the road - someone she thought she saw following her back when she was still living in Charleston...
The plot progresses quickly, so you won't feel bored at any point, and there's plenty of romance to satisfy any need (you see what I did there? No? Well, I guess it was a lame attempt anyway...). There are alot of unexpected plot twists, and Zara is forced to face the reality that everything she thought she knew - about herself and her family - is a lie.
I gave this book 3.5/5 stars. I'll be reviewing the sequel, Captivate in a few weeks :)

Find out more at www.needpixies.com