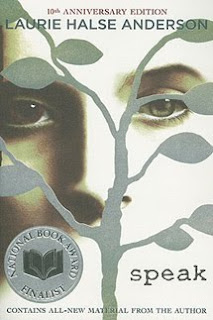 Summary (from the author's website):
Melinda Sordino busted an end-of-summer party by calling the cops. Now her old friends won’t talk to her, and people she doesn’t even know hate her from a distance. The safest place to be is alone, inside her own head. But even that’s not safe. Because there’s something she’s trying not to think about, something about the night of the party that, if she let it in, would blow her carefully constructed disguise to smithereens. And then she would have to speak the truth.

Melinda reminds me of myself in some ways: she's cynical - definitely not an optimist - and there were times when I would read a paragraph and think that somehow, the author had gotten inside my head and stolen my thoughts. Melinda's voice is that real to the reader, and it's hard not to get pulled in.

I'm not going to include any spoilers, but here's a short summary:
Melinda isn't your average freshman girl. She showed up to her first day of highschool without a single friend in the world, all because of an incident that occurred at a party during the summer. She is completely isolated. Alone. And now, Melinda has decided that she is going to remain silent about the events that led to her calling the cops the night of the party.
Again, no spoilers, but I will say this: no matter who the reader, they will be able to identify with Melinda in some way, because we've ALL been there; gotten ditched by someone who thought we weren't worth their time, gotten shunned by people we thought were there for us, lived with a family that was falling apart... we've all been Melinda at one point in our lives, so it's not difficult to imagine yourself in her situation.
I honestly adored this book. I know a lot of people have been saying that because it was banned and everything, but I think that even if I had randomly picked it up off the bookstore shelf, I would feel the same way. This book is one of the rare few that really makes you take a step back and ponder what you would've done, had you been in the main character's situation. It makes you self-reflect, which not a lot of books can do. For that reason, I gave it 5 / 5 stars.
Read this book. You won't regret it.
5 out of 5
Posted by Unknown at 12/15/2010