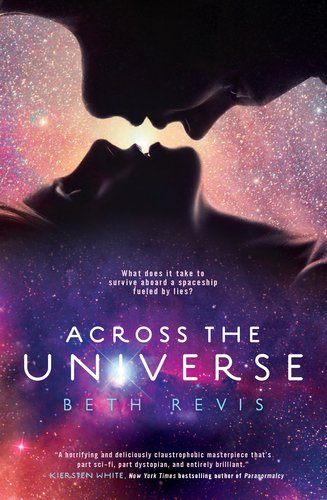 
A love out of time. A spaceship built of secrets and murder.


Seventeen-year-old Amy joins her parents as frozen cargo aboard the vast spaceship Godspeed and expects to awaken on a new planet, three hundred years in the future. Never could she have known that her frozen slumber would come to an end fifty years too soon and that she would be thrust into the brave new world of a spaceship that lives by its own rules.
Amy quickly realizes that her awakening was no mere computer malfunction. Someone-one of the few thousand inhabitants of the spaceship-tried to kill her. And if Amy doesn't do something soon, her parents will be next.
Now Amy must race to unlock Godspeed's hidden secrets. But out of her list of murder suspects, there's only one who matters: Elder, the future leader of the ship and the love she could never have seen coming.
---
My Summary: Amy's parents are important people - her mother is a biological splicer, and her father is sixth in command in the army - so when they are chosen to be cryogenically frozen for 250 years and sent to another planet at the edge of the universe, they can't turn down the opportunity. But they give Amy a choice - to stay behind. She can stay with her friends and her boyfriend and live a long, happy life on earth - the only thing missing would be her parents.
Neither of her parents expected her to give up her life, but Amy knew she couldn't go on living if it meant her parents were gone forever. So, after watching her parents get frozen, Amy steps into her cryo-coffin and says goodbye to her life on earth.
After what feels like an eternity, Amy feels herself waking up. But something is wrong: someone has unplugged her box, leaving her to drown in the melted ice-water. She's sure she's about to die when suddenly a boy around her age - the next leader of the ship: Elder - appears and helps pull her out.
Amy's expecting to see her parents, but that isn't the case; Amy has been melted too early (approximately 50 years), and her parents are still sleeping soundly in their cryo-chambers. She won't get to see them until the ship lands, by which time she'll be older than they are.
And that's not the only problem. Someone has been unplugging others like herself, leaving them to die. So far, two have died, and two have survived - including Amy. If Amy and Elder aren't able to figure out who is sabotaging Amy's parents mission, their whole future could be at stake...
My Thoughts: I bought this book after months of reading people's positive reviews, expecting some awesome explosion of pure AWESOME that I would never be able to forget. I mean, the book was good, don't get me wrong... but it wasn't mind-blowingly amazing. Maybe it's just the fact that I read it after Delirium, or the fact that the romance wasn't a huge part of the plot, but I didn't enjoy it as much as I thought I was going to....
Anyways, on to the positive (I hate saying bad things about a book, even if it's just my opinion; I think of it as years of someone's life, and dozens of hours of hard work, and I hate finding fault in that): I really like the way the point of view of the narrator switched between Elder and Amy - you got to see more of what was going on, because each character thought in a different way, and each character got to see things that were important to figuring out what was going on.
I loved the idea of 'The Season" - it was so disgusting and horrible to think about, but you could actually picture it having to happen that way in that type of setting, ya know? And Amy's heartbreak was totally believable - the way she was torn between her feelings for her boyfriend from before (who was long dead) and Elder made her seem deeper than your average "OMG HE'S HOT AND HE'S THE ONLY GUY HERE, MIGHT AS WELL!".
Final Thoughts: I recommend this book to anyone who is a fan of dystopian novels, and definitely to anyone who loves sci-fi and space-type novels. The premise of the book is really interesting, and you'll definitely enjoy the plot twists and turns!
Posted by Unknown at 3/15/2011