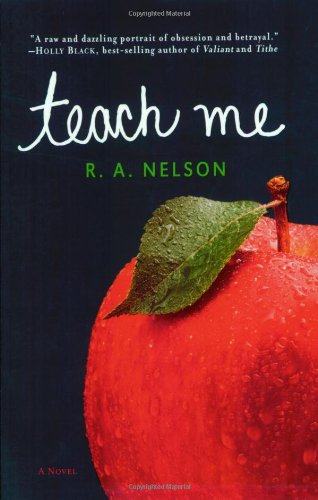 
Summary (from the author's website): "There is not a name for what I'm feeling. There is no description for it. To call it yearning would be like calling the ocean water. Whatever this thing is, it shoves you inside itself and you can't measure its boundaries because they go too far and you don't have enough time. Or you move toward the boundaries and they move away. There has been an earthquake in my life.”

Teach Me is a powerful debut novel that readers will not be able to put down. From the very first page, Nine speaks in a voice that is at once raw, honest, direct, and unusually eloquent, inviting you inside an experience that fascinates everyone—an affair between teacher and student—and giving a personal answer to the question: How does this happen? R. A. Nelson's strong writing is paired with a story about a love so intense that the person you're with becomes your world, and when you lose that person, you lose your world.
---
My Summary: Carolina ("Nine") is the type of girl you love to hate: practically a genius, she doesn't even try when it comes to grades and doing well in school. Always a bit of a loner, Nine finds herself drawn to the mysterious, unconventional English teacher(Mr. Mann), who gets her to challenge her own opinion of poetry and history.
Nine thinks this little crush is one-sided until the day she finds herself in the passenger seat of his car while he confesses his feelings for her. Soon the two are caught up in a secretive romance, always looking over their shoulders in case they are found out. But things can only end badly, as Nine discovers when Mr. Mann mysteriously breaks it off...
My Thoughts: Despite the controversial subject, I really enjoyed this book. Nine is such a quirky character that you can't help but feel for her during those tough moments, and even when she seems to go a little bit... well, crazy, you kind of wince a little but still hope that she gets a happy ending (or maybe that's just me - I'm a sucker for happy endings).
The other characters were great as well. I adored Nine's best friend (the poor guy had to go through so much!), and I really liked Mr. Mann as well, even if he is made out to be the 'bad guy'. You understood why he did what he did, and you couldn't help but feel bad for him after everything Nine did.
The writing was awesome. Pure awesomeness with extra awesome on top (does that make sense? I don't think so). R. A. Nelson has a really unique writing style that I really liked, and Nine's point of view is hilarious.
Final Thoughts: I recommend this for anyone who's curious about how exactly something like this could happen. It's a great contemporary lit book, but probably not for anyone under 16.
Posted by Unknown at 5/06/2011