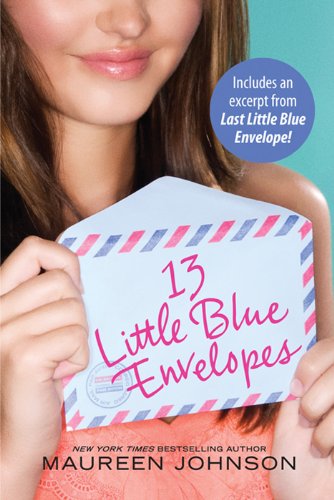 
Summary (from Goodreads): When Ginny receives thirteen little blue envelopes and instructions to buy a plane ticket to London, she knows something exciting is going to happen. What Ginny doesn't know is that she will have the adventure of her life and it will change her in more ways than one. Life and love are waiting for her across the Atlantic, and the thirteen little blue envelopes are the key to finding them in this funny, romantic, heartbreaking novel.

Inside little blue envelope 1 are $1,000 and instructions to buy a plane ticket.

In envelope 2 are directions to a specific London flat.


The note in envelope 3 tells Ginny: Find a starving artist.


Because of envelope 4, Ginny and a playwright/thief/ bloke–about–town called Keith go to Scotland together, with somewhat disastrous–though utterly romantic–results. But will she ever see him again?


Everything about Ginny will change this summer, and it's all because of the 13 little blue envelopes.


My Summary: Ginny has always been a quiet, well-behaved girl - the polar opposite of her aunt Margaret, who's always been the 'black sheep' of the family. Ginny loves her aunt, despite what her family thinks - she thinks she's more interesting when Aunt Peg is around, and life seems a lot more fun.

Until Aunt Peg disappears, leaving Ginny and her New York apartment behind. No one hears from Aunt Peg after that, until 3 years later, when they get the call: Aunt Peg passed away after a long, difficult battle with cancer.


Ginny can't believe her vivacious, lively Aunt is dead - she refuses to, preferring to live in a state of denial. Then, a few months after the funeral, Ginny receives a letter giving her instructions to pick up a package at her Aunt's favourite restaurant. Inside the package are 13 letters written by Aunt Peg, the first of which is instructing Ginny to buy a plane ticket to London.


Soon Ginny is off on a whirl-wind adventure, doing things she would never have done without the letters: she donates hundreds of dollars to charity, asks a total stranger out for coffee, and   spends the night on a park bench in Paris. Thanks to the letters, Ginny breaks out of her shell... but what will she do when there are no more letters, and her final connection to Aunt Peg is gone forever?

My Thoughts: I've heard a lot of mixed reviews about this book, but I absolutely LOVED it. The moment I read the synopsis, I knew it was the book for me - who wouldn't want to read about travelling across Europe, mysterious letters, and hot European boys? Add to that the awesome, flawless writing of Maureen Johnson, and you've got yourself a great summer read.

Ginny was a great character - you really see her grow up over the course of the novel, and she does become more confident and adventurous - just like her aunt hoped she would be. I also loved Keith - he was a bit of a jerk at times, but you knew that underneath, he really cared about Ginny.


Final Thoughts: There's not much more I can say about this book without giving away too much, so all I'll say is this: if you're looking for a great light read perfect for enjoying by the pool, you should defiinitely check out 13 Little Blue Envelopes, and the sequel, The Last Little Blue Envelope (which I've already ordered and am waiting anxiously by the mailbox for, just so you know).