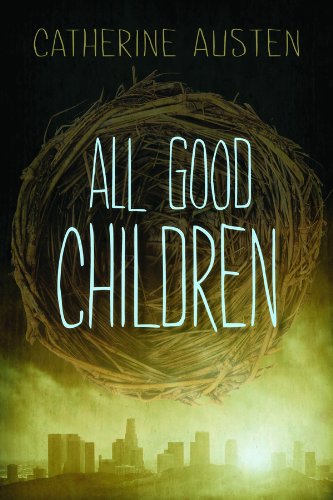 "Living with hope is like rubbing up against a cheese grater. It keeps taking slices off you until there's so little left, you just crumble."


Quick-witted, prank-pulling graffiti artist Maxwell Connors is more observant than the average New Middletown teenager. And he doesn't like what he sees. New Middletown's children are becoming frighteningly obedient, and their parents and teachers couldn't be happier. As Max and his friend Dallas watch their classmates transform into model citizens, Max wonders if their only hope of freedom lies in the unknown world beyond New Middletown's walls, where creativity might be a gift instead of a liability.
For those who like their dystopias with a rich character sauce and a side of humour.
---
My Summary: Life hasn't been what you'd call 'easy' for Max - ever since his father died three years ago, his mother, his sister, and himself have been forced to uproot their lives. Going from being filthy rich to just scraping by, Max is pretty angry about the way his life is  - especially because people in New Middletown treat him like he's worthless now. Max strikes back with his art - sprawling graffiti scenes painted on every surface that will hold paint. Most would call him a trouble-maker, but Max manages to do all this while maintaining an A+ average at an academic school, so he gets away with a lot.
Until strange things start happening to the kids in New Middletown, and Max can't shake the suspicion that it's being caused by the parents in the city. As everyone he cares about begins to change - into what he calls 'zombies - Max must fight to protect the only things he has left: his family and his art.
My Thoughts: I really, really enjoyed this novel for a number of reasons: the first of which being that it's a dystopian, but it's not too far in the future, so it's easy to envision Max's world. The second reason being that it begs the question: when does government control and  involvement in our lives go too far?
I also really enjoyed the writing. The author did a great job with imagery, painting a desolate landscape inside my head. And she didn't shy away from emotion, either: unlike with a lot of protagonists, you can really see how much Max cares about his mom and little sister, along with his best friend Dallas - you can feel his desperation towards not being able to help or protect the people he loves. His emotions come across very strongly to the reader, which I love; how many times have you read a book where something happens and the protagonist goes, "oh no... this sucks"? I know I've had a quite a few, and this novel was a refreshing change from that.
Final Thoughts: I strongly recommend this novel to anyone who is a fan of realistic dystopians, and to anyone who hasn't really ventured very far into the genre and would like something not too crazy to start off their exploration. Check it out! I know I'm looking forward to a lot more from author.
Posted by Unknown at 9/10/2011