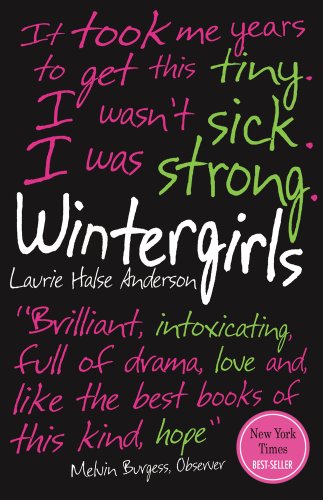 “Dead girl walking,” the boys say in the halls.
“Tell us your secret,” the girls whisper, one toilet to another.
I am that girl.
I am the space between my thighs, daylight shining through.
I am the bones they want, wired on a porcelain frame.

Lia and Cassie are best friends, wintergirls frozen in matchstick bodies, competitors in a deadly contest to see who can be the skinniest. But what comes after size zero and size double-zero? When Cassie succumbs to the demons within, Lia feels she is being haunted by her friend’s restless spirit.

In her most emotionally wrenching, lyrically written book since the multiple-award-winning Speak, Laurie Halse Anderson explores Lia’s descent into the powerful vortex of anorexia, and her painful path toward recovery.
---
My Summary: Ever since best friends Lia and Cassie made their 'skinny pact' years ago, each one has been on their own downward spiral. Cassie became bulimic, while Lia became anorexic. Both girls managed to get themselves down to dangerously low weights, and Lia was hospitalized multiple times while Cassie managed to keep her secret from her parents. Since Lia's release, Cassie hasn't spoken to her, leaving her completely alone.
But one night Cassie calls Lia from a motel room in the middle of nowhere. Lia doesn't pick up, thinking it's a prank - only to find out the next day that Cassie died the night before only a few hours after calling her. When Lia checks her phone again, she finds 33 missed calls - every single one from Cassie.
Now in the wake of her friends death, Lia must face facts: she's spiraling out of control. Haunted by guilt and thought of Cassie, Lia throws herself into a frantic search for the truth about the night Cassie died. Because Lia's convinced that finding out what happened to her friend will save her.
My Thoughts: This book was so, so powerful. Laurie Halse Anderson pours so much emotion into her writing that it makes it painful to read. The thing is, though, you absolutely need to keep reading - you have to find out what happens to Lia or it'll drive you nuts. Because despite what she's doing, you know she wants to get better... she's just not strong enough.
I loved the way the author gave you bits and pieces of Cassie and Lia's past slowly, so that by the end your opinion of both girls has been formed and altered multiple times. Cassie is not who you think she is, and neither is Lia, but by the end you understand why they are the way they are.
I also loved the way the author portrayed the internal struggle Lia was having with herself. This glimpse into the mind of someone with anorexia really helps you understand why these people can't simply "get better", and I loved that the author didn't make it seem like recovery was easy.
Final Thoughts: I recommend this novel to fans of darker contemporary literature (over the age of 16).
Posted by Unknown at 9/24/2011