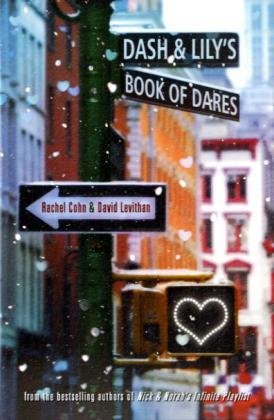 
Summary (from Goodreads): “I’ve left some clues for you.
If you want them, turn the page.
If you don’t, put the book back on the shelf, please.”

So begins the latest whirlwind romance from the New York Timesbestselling authors of Nick & Norah’s Infinite Playlist. Lily has left a red notebook full of challenges on a favorite bookstore shelf, waiting for just the right guy to come along and accept its dares. But is Dash that right guy? Or are Dash and Lily only destined to trade dares, dreams, and desires in the notebook they pass back and forth at locations across New York? Could their in-person selves possibly connect as well as their notebook versions? Or will they be a comic mismatch of disastrous proportions?

Rachel Cohn and David Levithan have written a love story that will have readers perusing bookstore shelves, looking and longing for a love (and a red notebook) of their own.
---
My Summary: By some stroke of luck, Dash's parents have left him alone for the holidays in New York. Dash hates everything about the Christmas season - his idea of a perfect Christmas is spending the day with a stack of books.
Lily's parents dropped the bomb this year: they're leaving for Fiji and wouldn't be back until around New Years. But what's a girl to do when there's no one around to spend her favourite holiday with? Easy: with the help of her older brother, Lily composes a moleskin notebook full of dares, hiding it between 2 volumes of her favourite book in one of the thousands of bookstore in The Strand, instructing the finder to follow the clues if they're brave enough. This, she hopes, will brighten up her dreary holiday.
Dash finds the notebook and decides to complete a few of the dares. From walking around a bookstore holding The Joys of Gay Sex to feeling up the Macy's Santa on Christmas Eve, the dares keep getting tougher and tougher. But Dash is not going to let Lily win. He start leaving her dares as well, making the object of the game to get the red notebook back. But the notebook is not just where they leave their dares - it becomes a way for them to talk; to get to know each other through their words and opinions. But what'll happen when the dares run out and they finally meet? Will their visions of each other - formed thanks to the notebook - match up to who they really are, or are they doomed to be nothing but penpals?
My Thoughts: Having just read one of Cohn and Levithan's other collaborations a few weeks ago (Nick & Norah's Infinite Playlist), I was expecting a lot from Dash & Lily. And I wasn't disappointed.
Dash and Lily were great characters. I loved the way they contrasted each other, and the way they just kept pushing each other with the dares. It honestly made me wish there was someone I could start a red notebook with. Dash was definitely swoon-worthy (his word-play just made him that much more attractive - who can resist a guy who loves reading and sarcasm?).
I also really enjoyed the plot. It wasn't a straight-forward 'finish-the-dares-and-we-can-meet' type of thing, which I really liked (probably because the authors didn't plan anything ahead of time). And the characters didn't fall head-over-heels in love the moment they saw each other - definite plus, because it made it seem more real (and if you read the novel, you'll know what I mean).
Final Thoughts: This was a great light read. It was hilarious and kept me hooked until the end, and I definitely recommend it for anyone looking for something funny and cute to read  around the Christmas season. Recommended for ages 14 and up, for both guys and girls.
Posted by Unknown at 10/22/2011