The lovely Nova Sparks is here today to answer a few questions about her reading preferences and her sci-fi/urban fantasy series The Dome Trilogy (now available on amazon!).


What inspired you to write a sci-fi/urban fantasy novel? Was it a conscious decision or did it just sort of happen?
I'm absolutely IN LOVE with science fiction! Ever since I was a little girl, that's all I would gravitate towards, science fiction television shows, movies, books, etc. I knew that I was going to write a television show for HBO and that I was going to make it science fiction, eventually I changed my mind and turned the television show treatment into a book and that's how the DOME trilogy came to be. I really do believe that science fiction runs through my veins. It just comes so natural to me. I guess I could say this whole thing just sort of happened.
What is your favourite paranormal / sci-fi element (vampires, werewolves, faeries, angels, etc)?
My FAVORITE is definitely ALIENS, and you can see my love for aliens in my first book series, the DOME trilogy. If I could, I would write about aliens forever, but I know that would suck for everyone else after a while. I will say that my next sort of paranormal/sci-fi series will center around angels and demons but will definitely have a twist to it. Although I'm not a religious person, I've always been fascinated with angels and demons, so I'm really excited to start working on it.
Do you prefer to read e-books or paper books? Why?
If you woud've asked me this a few years ago, I would've definitely said Paperback books, but ever since I got my Kindle, it's E-books all the way. I really like the convenience of e-books. With books, if I wanted to read more than one while I'm out and about, I'd have to carry them all with me and I hate carrying things. With an e-book, I can have hundreds of books with me and only have to carry one lightweight device. LOL sounds like I work for Amazon, right?
How long does it usually take you to write a book?
Well I guess I can say not that long. The first thing I do before I start writing a book is do an outline, and my outlines are always really really really brief. I'm talking one paragraph. And from that paragraph I just start writing the book. I can finish writing a book in two months with my schedule, but its the editing and fixing things and the constant changing of my mind that takes up a lot of my time with releasing a book. If I had all the time in the world, I'm sure I could write a whole book in about two weeks. But I'm glad I don't have that kind of time. That would mean I'm poor or living on the street. But then I wouldn't have a computer let alone a pen or paper.
And last but not least: do you believe in aliens?

Is this even a question? OF COURSE I believe in aliens! When I was a little girl I used to believe that I was an alien and would stare out my window everynight, hoping my real parents would come down from the sky and get me. Plus, I watch way too many documentaries and read too many books that have tremendous amounts of evidence pointing to aliens being real. I guess I think of it like this. This universe is bigger than we can even imagine, bigger than we can even measure, and it's expanding all the time. We live in one galaxy, one solar system. There are soooooo many other galaxies out there, so many other planets. How silly would I be to believe that we're the only ones? Oh yeah, and I've seen a UFO before. Right here in NYC. I thought I was the only one, but thousands of people saw it and filmed it and you can see the video of it on youtube. That ain't no weather balloon!

Thank you so much Stephanie for having me on your blog! It has been really fun!
No problem Nova, it's been great having you!
And now, lovely readers, here's a sneak peak at The Dome by Nova Sparks: 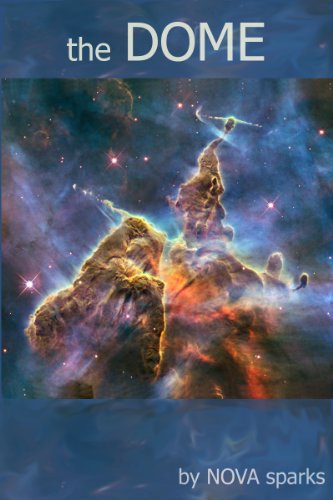 What if you knew the exact date and time the world will end, what would you do? Sam Tucker was faced with that dilemma when he began getting visions of the Earth's demise. Luckily for him, he was able to save his family and as many people as he could before the tragic event occurred, and he did so with the help of unknown visitors. With Earth now destroyed, Sam, his family and thousands of other lucky survivors must live the rest of their lives on a faraway planet in a Dome that simulates life on Earth. But Sam's mind can't seem to rest as a few questions arise. Why did the aliens save them? How did they know about Earth's sure fate? And exactly what are they hiding? Emma Tucker begged for an escape from her boring life but never in a million years did she think it would come at the destruction of Earth. Living on a new planet and finding it difficult to get rid of her rebellious habits, Emma finds herself making friends with a member of the alien race and it soon develops into an unexplainable love; a love that is more dangerous than she could ever imagine. While her father is searching for his own truths, she has no idea that she is stumbling on a truth of her own. Told from the point of view of both Sam and Emma, author Nova Sparks takes readers on a journey to discover love, fate, faith, truth and the mystery of the DOME!
Check out the book trailers!
Trailer #1: Sam

Click on one of the links below to sample or purchase the DOME (the DOME trilogy #1):

Visit Nova's blog to find out more about The Dome: http://novasparks.blogspot.com
Posted by Unknown at 11/12/2011