Recently, I got the chance to read a copy of Tanya Lloyd Kyi's Anywhere But Here and loved it, so when I was offered the opportunity to ask Tanya a few questions, I jumped at the chance. Anywhere But Here is out in a little less than a week, so be sure to check out the summary below and click through to my review here. 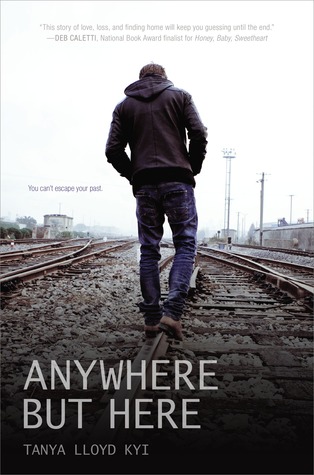 Summary: Ever since his mom died, Cole just feels stuck. His dad acts like a stranger, and Lauren, his picture-perfect girlfriend of two years, doesn’t understand him anymore. He can’t ditch his dad, so Cole breaks up with Lauren. She doesn’t take the news very well, and Cole’s best friend won’t get off his case about it.

Now more than ever, Cole wants to graduate and leave his small, suffocating town. And everything is going according to plan—until Cole discovers the one secret that could keep him there…forever.

Do you prefer small towns like Cole's, or would you rather live in a big city? Why?

I grew up in Creston, a small town very much like Cole’s. But soon after I moved to Vancouver, a friend took me to see a writer speak at the Orpheum Theatre. That theatre is stunning inside – like something from a movie set. And the writer was awe-inspiring. I thought, if living in Vancouver meant going to places like that and listening to people like her, I was never leaving.

There are still many things I miss about my small town – the mountains, the lakes, the people who stop to chat in the grocery store. But I’m not ready to leave the city anytime soon!

Was it difficult to write from a male point of view? What would you say was the biggest challenge?

Originally, I thought Anywhere But Here would be narrated by two characters, one male and one female. They’d tell the story from their own points of view. But Cole quickly took over. He was so intelligent in some ways and so clueless in others, I fell in love with him.
I showed a draft of the manuscript to several male readers, including my dad. My dad pointed to one scene (in which Cole visits the bandstand with Hannah), and said something along the lines of: “He’s in the bandstand with her, and she’s offering, but they don’t have sex? That would never happen.”

I rewrote the scene. But that was the first and hopefully the last time I’ve ever talked to my dad about sex.

Did you model any aspects of Cole after any characters, fictional or otherwise?

I blatantly stole the conversations Cole and Greg have about aliens coming to Earth. Those two make a deal that they’ll believe each other, no matter what. My husband has made the same agreement with his friend Glenn. If an alien punches one of them on the nose, the other is obligated to believe.

With the exception of a few conversations, though, Cole is his own person. I’m not sure where he came from, but I do find a lot of truth in Cory Doctorow’s thoughts on how characters come to life. (http://www.locusmag.com/Perspectives/2013/01/cory-doctorow-where-characters-come-from/)

What, in your opinion, is the best way to deal with grief? 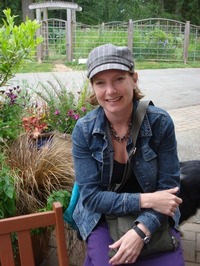 I watched a cousin lose a child a few years ago and I can’t even imagine enduring that kind of pain. I don’t know if there’s a “best” way to deal with grief. It’s easier to see, objectively, the less productive ways to cope – and Cole experiments with several.

Do you have any writing quirks or habits?


Writing is a quirky habit in general. I try to write each morning. Then my characters spend their afternoons kicking around my brain, seeing what they might next knock loose. There’s plenty of random junk in there from which to choose!

Thank you for having me, and thanks for the thoughtful questions!

Thanks for taking time out to answer my questions, Tanya! I can't wait to read more from you!

Check out more from Tanya on her blog, www.tanyalloydkyi.com, and click through the book cover to visit Anywhere But Here's Goodreads page. If you're a fan of contemporary lit, it's definitely not a book you want to miss!
Posted by Unknown at 10/09/2013