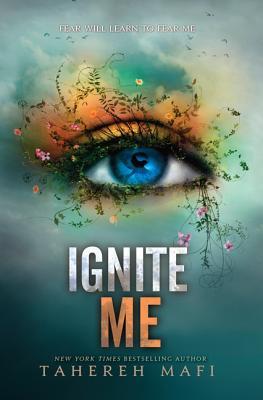 Summary (from Goodreads): Juliette now knows she may be the only one who can stop the Reestablishment. But to take them down, she'll need the help of the one person she never thought she could trust: Warner. And as they work together, Juliette will discover that everything she thought she knew - about Warner, her abilities, and even Adam - was wrong.


My Summary: Juliette has just escaped an encounter with the head of the Reestablishment, who just happens to be the father of the man who saved her life. But she's not done fighting.

With their numbers decimated, her friends from Omega Point seem to have lost all will to go on, and even Adam seems to have given up the idea of a revolution. But Juliette knows she has to be the one to take down the Reestablishment, and she's not giving up ... even if it kills her. She finds an unlikely ally in Warner, and together they just might be enough to burn the Reestablishment to the ground.

My Thoughts: I just finished my second reading of Ignite Me, and it was even better the second time around. Tahereh Mafi is a master of all things words, and if I ever develop even half of her writing ability I will be able to die happy.

The character development in this installment floored me. I could not believe how realistic it was, and the way it was done was subtle but powerful. You can tell Tahereh Mafi knows her characters inside and out - the way the development flowed never felt rushed or unnatural. Juliette finally found her voice, and I couldn't have been happier.

I also loved the banter between Kenji and Juliette - it was hilarious, and definitely brightened up the sadder moments of the book. I also really liked what happened with the romance aspect (not giving anything away, but !!!). The directions the relationships took were very well thought-out, and there were some messages in there that you don't often see in YA, no matter the genre. Mafi's characters get under your skin and stay there - I'll miss them terribly. It's not often that you get so attached to characters, but Mafi truly has a gift.

Final Thoughts: All in all, this was an amazing conclusion to one of my all-time favourite trilogies. I wholeheartedly recommend this series to anyone who enjoys YA, as well as anyone who enjoys contemporary fiction. Mafi's writing reads like prose, and I can't wait to see more from this extremely talented author.
Posted by Unknown at 2/20/2014