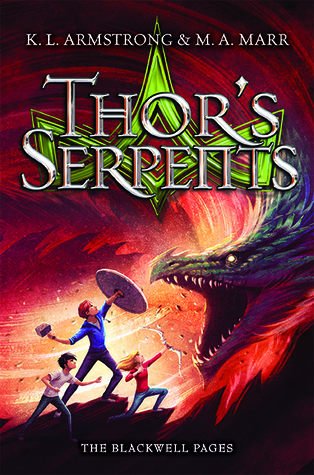 
Summary (from Goodreads): Thirteen-year-olds Matt, Laurie, and Fen have beaten near-impossible odds to assemble their fellow descendants of the Norse Gods and complete epic quests. Their biggest challenge lies ahead: battling the fierce monsters working to bring about the apocalypse.

But when they learn that Matt must fight the Midgard Serpent alone and Fen and Laurie are pulled in other directions, the friends realize they can't take every step of this journey together. Matt, Laurie, and Fen will each have to fight their own battles to survive, to be true to themselves, and to one another - with nothing less than the fate of the world hanging in the balance.

It's always so incredibly difficult to review the last novel in a series, so I like to keep them short and sweet so as to avoid any accidental spoilers. Here goes!

I loved the group dynamic in this installment. In the previous two novels, the Champions were just meeting one another and figuring out who they were. In Thor's Serpents, the Champions are forced to make the choice once and for all: will they trust each other and stand together, or fight alone?

As usual, the writing was brilliant. The plot was expertly woven and the characters were amazingly realistic. Armstrong and Marr definitely know their way around the mind of a teen - even those with superpowers and godly ancestors. The Champions' insecurities and doubts shine through, turning them from your stock imagine superhero into real life kids with real life issues, Laurie asks a really interesting question in this novel, and it really made me think: how do you go back to your normal life after living through something so catastrophic? Do you just smile and pretend it never happened, or do you let it affect everything you do?

You can really see the growth of the characters throughout this installment, and the way they've come into their own through the series. As usual, Fen made me want to wrap a blanket around him and protect him from the world. Matt too. Both boys were polar opposites, but they were both examples of what can happen when you don't have a family you can rely on totally.

Final Thoughts: If you haven't read this series yet, you are seriously missing out. I recommend this trilogy to fans of Percy Jackson and the Olympians and other mythological series.
Posted by Unknown at 6/27/2015