The Improbable Theory of Ana and Zak 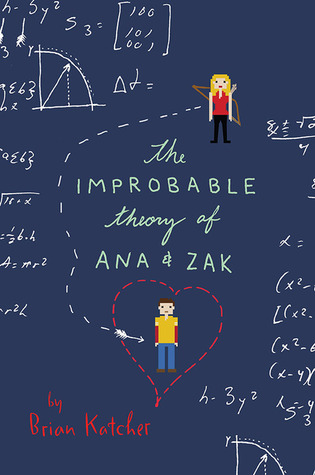 
Summary (from Goodreads): It all begins when Ana Watson's little brother, Clayton, secretly ditches the quiz bowl semifinals to go to the Washingcon sci-fi convention on what should have been a normal, résumé-building school trip.

If slacker Zak Duquette hadn't talked up the geek fan fest so much, maybe Clayton wouldn't have broken nearly every school rule or jeopardized Ana’s last shot at freedom from her uptight parents.

Now, teaming up with Duquette is the only way for Ana to chase down Clayton in the sea of orcs, zombies, bikini-clad princesses, Trekkies, and Smurfs. After all, one does not simply walk into Washingcon.

But in spite of Zak's devil-may-care attitude, he has his own reasons for being as lost as Ana - and Ana may have more in common with him than she thinks. Ana and Zak certainly don’t expect the long crazy night, which begins as a nerdfighter manhunt, to transform into so much more…

My Summary: Ana and Zak have nothing in common. Nothing at all. In fact, the first time they speak to each other, Zak makes a sexually suggestive comment and Ana responds by embarrassing him in front of hi band of nerdy friends. And when Zak joins the quiz bowl team, it's all Ana can do to keep herself from throttling him.

On their way to a tournament, Zak can't seem to keep his mouth shut about Washingcon, entrancing Ana's younger brother Clayton (a nerd in the making). So when Clayton runs off to the convention, Ana enlists Zak's help to find him and bring him back before their absence is discovered. After all, it's Zak's fault her brother is missing.

What starts as a night with someone she can barely tolerate in a sea of weirdos dressed in costumes soon turns into one of the best nights of Ana's life. And although Zak loves Washingcon, being there with Ana has made it the night of his life. But what happens when they can't find Clayton, and find themselves accidentally stumbling upon the darker side of the con?

My Thoughts: I waited so long to get my hands on this novel that anything but perfection would probably have disappointed me. Fortunately for me, Ana & Zak delivers in every single way.

First off, that cover is amazing. I love it! And it ties in really well with the story itself, so you know it's a winner. Props to the design team because I was lusting after this book after catching a glimpse of the cover - before I'd even read the summary.

Ana and Zak were such fun characters. They were both very well written and incredibly relatable. Ana's determination to find her brother and keep him from getting in trouble was touching, and Zak's determination to help her was even more so. I don't think I've ever shipped two more different characters, but Katcher somehow made it happen. The back-and-forth between Ana and Zak really made the novel, and the situations they managed to get themselves in had me laughing out loud.

I liked the way Ana and Zak's imperfections were out in the open - he was a jerk, she was obsessed with winning and way too uptight - and the way you could see that they sort of smoothed out each other's rough edges.

I also really enjoyed the whole Con aspect. I've always wanted to go to ComicCon, but this novel cemented it for me. The hilarity that ensues - especially the epic fight scene - made the novel a tiny bit ridiculous but still really fun to read.

Final Thoughts: If you're a fan of quirky characters and hilarious contemporary reads, I definitely recommend this novel!
Posted by Unknown at 7/25/2015